Collaborating on a highly produced podcast

One of the most interesting and gratifying projects to enter our doors in 2019 was the Destination Nature podcast by The Nature Conservancy.

Back in June, I received a call from Stacy Raine, a California-based producer that was looking for a partner to collaborate on a pilot podcast series that was still in the conceptual stages.  She had been contacting audio producers all over the country, looking for someone that could help her get a three episode podcast pilot recorded, edited, produced and launched.  The purpose of the podcast would be to showcase the important work that The Nature Conservancy was doing, and the general production requirements were going to be very high.

Stacy and I talked a lot in the early phases – dishing on podcasts that we respected and enjoyed, mapping out workflows and budgets, and generally getting to know one another.  It was quickly apparent that we shared a similar aesthetic and that we were both going to put everything into making this production the best it can be, so once budgets and timelines were sorted we were off and running.

To even get started, we’d have to put together a recording rig for her voiceovers.  We also hadn’t named it.  We couldn’t go crazy on the budget because this was just a pilot and no one was sure if a longer run was going to get funded, and we had to collaborate long-distance since we both live in different states.  We eventually came to a bare-bones but functional setup that just involved a mic, some blankets and a hand-held portable recorder, and the name “Destination Nature”.

With voiceover sorted we went about creating the rest of the parts needed for a podcast of this style.  After picking through a large stack of production music that never hit the tone exactly right, Bradley Morgan Dale, our music supervisor and lead composer pulled in some compositions that he’d been using to test out some new instruments and began molding those into what would become the theme music of the show.

At the same time, Stacy was coordinating and recording the various scientists that would end up telling the primary stories in these episodes.  There was a mix of new studio interviews, existing TNC footage, and even new recordings made out in the field that were brought together to form the basis of the three entirely different stories that these podcasts were going to tell.

Once the interviews were recorded they were transcribed and fact-checked, and from there Stacy would put together a paper-edit of the initial shape of the show.

Hours of recordings were pored over and reduced to the tightest and clearest parts of the story, and once that initial pass was done I was handed the raw tape and the paper edit with the task of getting a first cut put together.  The process of putting the first cut in place required me to develop a workflow that allowed quick movement from the appropriate timecode in the raw tape to the relevant position in the composite edit.  As I created the first edit, I was simultaneously sorting the clips into tracks by who was speaking, so that each voice could get its own global compression and eq treatment.

The first paper edit was cut in regular transcription format, but we quickly shifted to a spreadsheet based format so that we could assign each spoken line a specific line number in the spreadsheet.  This allowed us to sort the script by who was speaking, by the source location, and then back to line number order.

With the first edit completed, Stacy and her team would pore over the actualized version of the paper edit while Brad and I got to work on the rest of the sounds.  Brad would do an initial music pass against the first edit and I would collaborate with him about where we were doing things with music vs sound effects in any given part of the story.  We’d set to work re-timing the voice track to give room for the score and the sounds to do their parts in the telling of the story, and this allowed us to keep pace with the number of changes that would be coming.

The spreadsheeting process became hugely important later in the process as we would shift around big parts of the first edit after an initial listen in order to clarify or tighten the story.  Having everything numbered meant that we could strikethrough big blocks of text, move them to a new location, and be able to re-trace our steps the entire way.  It also allowed for small additions or clarifications via voiceover that would come back as requirements from the fact checkers.

Notes would come back, and I would then integrate everything into a mostly filled out second pass that included interviews, VO, sound effects and score.  From there a second round of revisions would be noted on the TNC side, and from here we’re mostly dealing with smaller tweaks to content on the voice edit side, VO pickups and changes, and broader thoughts and notes on the sounds, music, timing, and overall mix. 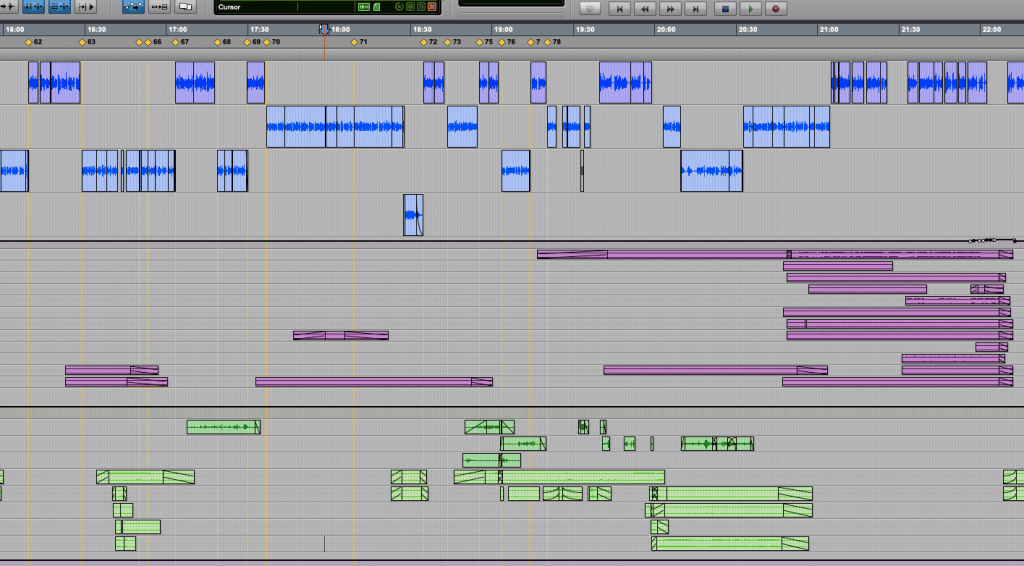 A part of a typical TNC mix. Markers are line numbers, blue is voice, purple is musical score, and green is SFX.

Another round or two of tweaks and we had a podcast that was ready to go.

These types of productions can take weeks to produce, and they require a clarity of purpose from the top that can be the final guide for the entire team to follow.  We were very fortunate to have that in spades with what Stacy and her team were able to produce.  These stories were amazing, the recording, scoring and editing process could not have gone better, and we were left with a project that we could all be proud to see out in the world.

I couldn’t be more grateful that I got that phone call just a few months ago.